HomeLife & StyleScary voices and ghost shadows, who is this "Gulabo Rani"
Life & StyleShowbizTrending

Scary voices and ghost shadows, who is this “Gulabo Rani” 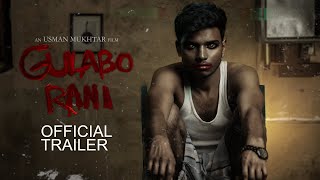 Recently, three Pakistani films have been announced for release on Eid-ul-Adha “Gulabo Rani”, which seems to indicate that the Pakistani film industry is on its way to recovery.

In this regard, actor Mukhtar Haroon on Wednesday uploaded the trailer of his new horror short film ‘Gulabo Rani’ on social media websites Instagram and YouTube.

The trailer shows three boys sitting in an old university room, overwhelmed with fear and horror and trying to scare each other.

The characters of the film scare each other with scary voices and the shadow of a ghost is seen on all three.

The film stars Osama Javed Haider, Meraj Haq, Daniel Khaqan, and Natasha Ijaz in the lead roles and is directed by Mukhtar Haroon.

The movie poster shows only one character sitting on a chair in a frightening manner.

Fans are appreciating the trailer of the movie Gulabo Rani on YouTube.

One user commented, “The hairs stand on end. This trailer is like a Hollywood movie. Mukhtar Usman is overwhelmed. “It’s called quality production,” wrote a user named Basit. Congratulations to the team.

A user named Abdullah Shahid said, “I am very excited about the film. The story looks interesting. The real horror movie is finally in Pakistan.

It should be noted that the movie ‘Gulabo Rani’ will be released in the month of July.