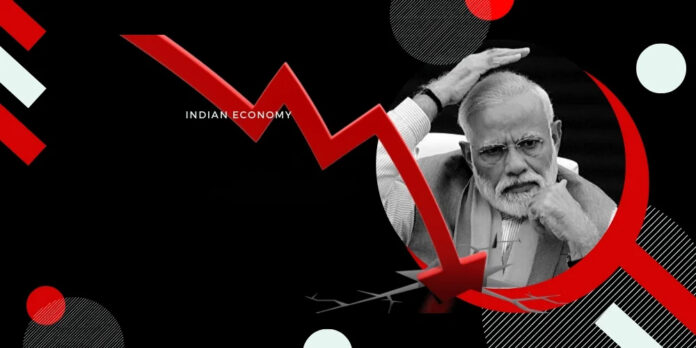 India is one of the 7th biggest economies in the world and for the past few years, its economy has been growing really fast. However, this is not the case today because the Indian economy has slow down and the worst is expected to hit the economy.

Many companies are experiencing a very sharp downturn in terms of sales. Foreign investors are in cascade pulling their money out of the Indian stock market because they’ve already lost their confidence with the Indian economy. Agricultural production is also down. The high rate of unemployment in the country, restricted bank lending, and closure of many institutions are signs that an economic meltdown has begun biting the Indian economy. The financial sector in India has made many blunders and the whole financial system is in a big trouble.

India has an exceptional automobile industry, but it is also succumbing to the prevailing economic conditions and it has taken a serious hit because now sales have dropped by about 40% the automobile industry is a key source of employment for many Indians and this decline means some of the people might lose their jobs.

In Asia and Africa, we’ve seen many nations experience a spectacular economic boom, but at the same time, things are falling apart in India. The country is heading towards an economic crisis. For many years, the Indian financial sector has been dominated by state-run banks, which have been very ineffective. In managing the Indian financial situation, the economy is poorly governed on top of connections between the leaders and the powerful Indian tycoons are what contributed to the credit crunch. This meant that the borrowers had to look for alternative sources of money. Because of this need, many shadow banks popped up and these unregulated lenders seeded very risky loans, especially in the real estate industry. Because of this, we have witnessed Punjab and Maharashtra cooperative banks being seized by authorities and the topics executives being arrested.

Due to these issues, many account holders have been restricted from accessing their savings accounts and this leads to panic as the customers have demanded to have their money back. The rumors of bank closures spread fast like wildfire resulting in bank runs as everyone’s scrambled to make their withdrawals. The run of the PMC bank happened a short time after the collapse of another lending institution.

Currently, the rate of economic growth has hit a six-year low and there’s a fear that more lenders will go bust if the trend continues. It’s now more difficult to secure loans and business is finding it difficult to expand their activities. Big Indian banks have seen their share price drop while traditional banks are still struggling to retrieve the outstanding loans. If more lenders go out of business, then this effect can diffuse through the entire economy.

Economists are saying that the Indian situation can be likened to what was happening to the United States before the 2008 economic crisis where the lenders succumb to the constraint of excess bad debt. Everyone is concerned that the Indian economy could face a very bad meltdown. Right now, India is in a big mess. With the population increasing with about 20 million people every year anyway, it is next to impossible to create job opportunities for the citizens. The GDP figures are also fraudulent and forged. The actual GDP growth is about 3.2 to 3.4% only. After experiencing years of economic boom, India’s economy is rapidly losing momentum. Lack of employment means insufficient cash for the Indian citizens and this is a big blow to the people’s purchasing power resulting in less consumption. Even if the government is saying that the economic slowdown is just momentary and economic growth is ahead.

A serious slowdown is being experienced across various industries. The investment rate is slowing down as mainly investors pull their money from the country and the banking sector is in a big crisis. At a slow pace, the Indian economy is losing its grip globally and it’s slowly shrinking to a domestic economy. All the signs are showing that things will only get worse. All of these economic problems started with demonetization, which is a historic blunder that has made the Indian economy plunge into a liquidity crisis. Now all the small and medium-sized enterprises are getting fewer profits from their operations and last more money is injected into businesses by various banks. The enterprise sector will find it difficult to restore things as they were.

The administration made a mistake by heavily investing in areas like defense and this is just using taxpayer’s money without the creation of any jobs in India. There are tens of stalled and ill-planned road and railway induction projects, which will not bring any viable return to the economy.

The demonetization and poor planning when undertaking various projects have further worsened the state of the economy. The introduction of goods and services tax or GST made almost everything a lot more expensive because now everything has this additional tax. The GST implementation has killed small scale industries in India. Usually, these small-scale industries are the real backbone of any economy anywhere in the world, and when you kill them, you kill the economy and the GDP of that country in the process jumps are also reduced. Since this sector employs millions of people in India. Indians like evading taxes and where these additional taxes, most businesses launder money through gold and hawala. Modi tried to destroy this informal economy by incorporating it into the formal economy, but everything backfired severely because of this situation, many companies are pulling their operations out of India and instead they’re focusing on countries like the Philippines, Vietnam, and Bangladesh, which have better corporate tax structures.

On top of a whopping 30% corporate tax. India has high levels of corruption and bureaucracy. The infrastructure also is bad. Ineffective trade unions, poor governance, 28% tax on goods, bad financial plans as some of the factors that are pushing companies out of India. The administration needs these high taxes to pay the politicians and the bureaucrats, and this is the reason why they’ve retained the form of British Systems. About 60% of the Indians are farmers and this section of the population contributes only about 15% of the national GDP and this is concerning the government so much. While the service and the manufacturing sector are the backbones of India, it has been penalized by the heavy taxes.

Insufficient funding and high costs of agricultural inputs have pulled the Indian agriculture sector backward. Hard economic situations are not being experienced in India alone. Everyone is affected and the global economic crisis might spread all over the world, especially with the current trade wars. Regardless of how the Indian government keeps playing the game, reality will always catch up. The administration did not address these economic realities for many years, in any way. We have a buoyant economy where the true economic numbers are rigged and it’s only a matter of time before everything falls apart. Right now, India has a debt-driven economy and once money borrowed by the state and the private corporations runs out, the little artificial growth we have will stop big social and economic problems will follow.

Instead of making a heavy military investment to counter Pakistan and interruptions over Nepal, this is the time in which the government should focus on creating more job opportunities for its people and make the economy vibrant again. About 20% of Indian minorities feel that they don’t have a sustainable economic future. In addition to this, 15 to 20% of all the Indians have the same feeling and this makes India a country where about 40% of the people are poor and helpless. The Indian economy is a big bubble that will burst at any time. Foreign investors have already realized it, and this is the reason why they’re pulling out of the country before things get out of control.

Factories are being closed every day in fast as a pulling their results is out of the country and jobs are being lost. Every second. Modi promised to be adding about 20 million jobs to the economy every year, and instead of adding jobs have been lost every day. Modi has failed miserably. For example, in 2018 India added only one 20th of what China added to its GDP. They only added $70 billion while China out of the about one point $4 trillion. On paper, the Indian GDP growth is about 5% because the government has changed the parameters used to measure the GDP to produce a figure that shows that the administration is performing. However, the reality is that the actual growth is about 1% as it has been proved by many economists, the economic setup has already been destroyed. With low GDP growth, a disorganized financial system, large numbers of semi-educated citizens and corruption,

.The economic meltdown might result to even lower employment. The Government does not seem to have an emergency plan to pull the country out of this shortly. Currently, a large portion of wealth is only owned by the top 1% of the population. While the majority of the Indian population is poor, the poverty situation is getting worse every day. Unemployment and hunger are increasing every day with little hope that things will change. The government is controlled by corrupt politicians and influential business people where the incompetent and corrupt government system making the decisions, the economic situation will only get worse. Probably the public will begin riots and protests against the administration soon. Unless things change at this stage, India is already done. The economy is dead. At any time, the bubble will burst and India will find itself in a historic economic collapse.