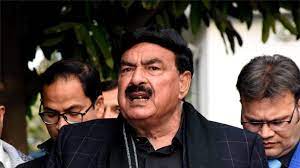 The IHC decision came after former interior minister filed the petition through his counsel against police crackdown and harassment of PTI leaders, activities ahead of the Islamabad long march.

The IHC ordered Sheikh Rasheed to appear before court tomorrow in person and stopped police, FIA from arresting former federal minister till May 25.

In the footage, a heavy contingent of police can be seen surrounding Sheikh Rasheed’s Lal Haveli to arrest the Awami Muslim League chief but failed in doing so.

Earlier, Rasheed in a statement claimed that four vehicles with government number plates have been deployed outside his Lal Haveli residence ahead of PTI’s long march to Islamabad.