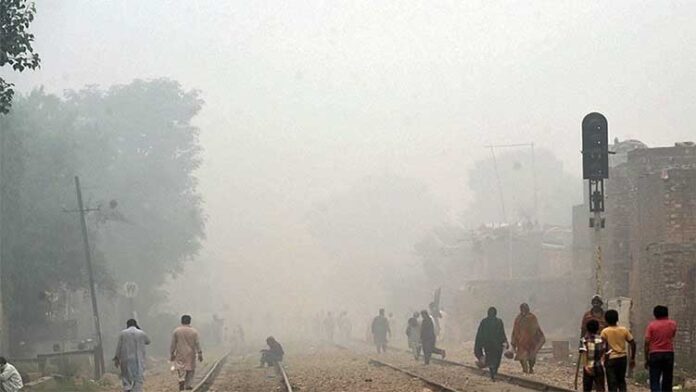 PESHAWAR, (APP) – Abid Ahmad (50), a poor driver of the container is battling for their life at Lady Reading Hospital (LRH) after he was diagnosed with acute pneumonia and respiratory infections caused by air pollution and COVID-19.

Doctors were making efforts to save the life of the poor Abid, who was on a ventilator for nearly 35 days at the Pulmonology ward of LRH after his condition got deteriorated in a private hospital.

Standing in front of the bed of his ill-fated father, Ahmad Khan, a resident of Mera Kachori Peshawar with stretched hands praying for his early recovery said, “My Baba who was a driver of a cargo container, was complaining about shortness of breath since last few months and often sit on the ground after walking few yards in a bid to restore his oxygen.” “Last month, we rushed him to a private hospital where he was diagnosed with acute respiratory infections and referred him to LRH.”

“Abid’s condition was serious. We put him on a ventilator after his oxygen level has significantly dropped due to acute pneumonia and aggravated asthma coupled with symptoms of air pollution and COVID-19,” said Dr. Anila Basit, Associated Professor, Pulmonology Department LRH while talking to APP.

She said the air pollution coupled with pneumonia had severely damaged his both lungs due to which he fell prey to the corona due to low immunity. Terming air pollution a serious threat to human lives, the senior pulmonologist said it could affect people of all age groups especially children and elder citizens, adding air pollution reduced lung growth and functions in children besides leading to respiratory chest infections, lung cancers, coronary heart diseases, strokes and asthma that often cause premature deaths if untreated.

“Air pollution was the major cause of stillbirth and preterm births besides less cognitive IQ and acute respiratory infections in children. I advised people to use face masks and adopt safe energy resources to improve the air quality index.”

Referring to the WHO report 2021, Dr. Anila said around seven million people die every year worldwide due to excessive use of hazardous gas emissions mostly by industrial units, brick kilns, vehicular traffic, and other means of air pollution.

In Pakistan, about 128,000 deaths were reported every year due to pollution-related diseases, according to a recent report of Fair Finance Pakistan, a non-government organization working to combat climate change.

According to the NGO, Pakistan, China and India account for the highest number of deaths owing to air pollution as millions across these countries were forced to breathe air that contains high levels of hazardous pollutants and Particulate Matter (PM 2.5) level pollution.

Ikhtair Wali Khan, Pakistan Muslim League-N KP spokesman and member provincial assembly said that Peshawarties were exposed to inhaling poor air quality due to a lack of vision and improper planning of the provincial government to combat the menace of air pollution and climate change.

Known for the fragrance of Gul-e-Dawodi in December, he said Peshawar was currently engulfed by thick smoke mostly being emitted by thousands of unregistered rickshaws, taxis, and unfit public transport while brick kilns, marble crushing units, and industries were additional contributors to air pollution.

He accused the previous PTI government of axing thousands of trees, and plants and destroying green belts in Peshawar for paving way for an ill-planned bus rapid transit (BRT) project, which further aggravated the gravity of the situation.

PM 2.5 pollution was a complex mixture of extremely small particles that stays for a longer period in the air and once inhaled can affect people’s hearts, stomachs, and lungs leading to strokes, asthma, cancer, and other chronic diseases. He said about 60 percent of pollution was being contributed by vehicles and rickshaws in Peshawar.

EPA conducted a scientific study with help of SUPARCO in 2017-18 at different locations of Peshawar where dust and pollution were measured in the air between five to 10 feet in height where PM 2.5 was almost four times higher than NEQS standards.

He said the study noted about 52mg/m3 higher dust and smoke particulate in the air while normally it should be around 15mg/m3 as per NEQS standards. He said the Bank of Khyber has established 20 air quality monitoring stations in KP including Peshawar.

Dr. Aftab Ahmed, Director of Livestock and Dairy Development said plastic pollution was more dangerous than air pollution as the former might transmit to people through eating animals and fish flesh. He explained that once it entered in the human body, the affected person would not feel hungry like a healthy person, and could be fatal with time.

Faridullah Khan, Deputy Director EPA KP said the shifting of brick kilns on Zigzag has started in the province, and two brick kilns one each at Och canal in Peshawar and Jalala Mardan were converted to this technology. He said 400,000 bricks can be prepared in 20 cycles under Zigzag compared to 300,000 bricks in 40 cycles in a common brick kiln unit.

Syed Ishtiaq Urmar, Provincial Minister for Environment and Forests said KP Environment Protection (Amendment) Bill 2022 has been passed by the provincial government under which a ban on preparations and manufacturing of all types of plastic bags was imposed. Vehicles Emissions Testing Stations (VETS) have been strengthened to check smoking-emitting vehicles, he added.

KP’s first Climate Change policy 2018 has been approved with a major focus on combating air pollution through whopping plantations and mass awareness to maintain air quality, he said. To combat air pollution, he said that the first manmade Ghari Chandan forest has been raised near Peshawar where over 3.2 million saplings were planted under the billion trees afforestation project.