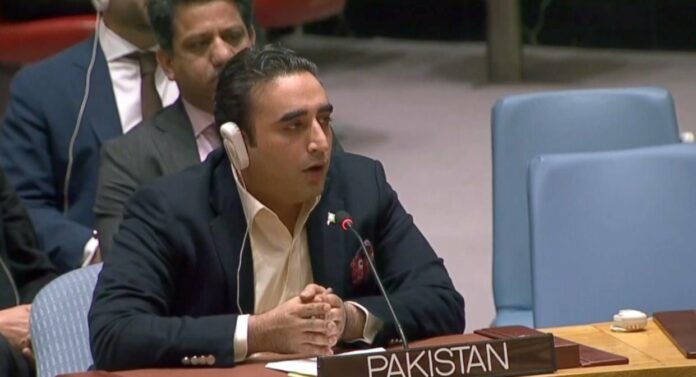 Foreign Minister Bilawal Bhutto Zardari on Wednesday stressed upon the United Nations Security Council to implement its resolutions over the Kashmir issue and deliver upon its commitment to peace in the region and ‘prove that multilateralism can succeed’, Pak Revenue News reported.

Speaking on “International peace and security “Reformed Multilateralism” in the Security Council, the foreign minister said that there was an agenda item left unaddressed by the UNSC.

“We believe it a multinational agenda, an agenda of this UNSC and if you want to see the success of the multilateral institution or multilateralism and the success of this very Council, surely you can aid in this process; allow the implementation of the resolutions of the UNSC, when it comes to the question of Kashmir, prove the multilateralism can succeed, prove that the UNSC can succeed and deliver peace in the region,” he added.

The foreign minister said the world’s attention must also turn away from pursuing narrow national ambitions to addressing the several global threats and challenges we confront: climate change; the nuclear threat; terrorism; refugees and migration; famine and hunger; the misuse of the metaverse.

“Simultaneously, we must confront the rise of the ideologies of hate, xenophobia, populist extremism and racial and religious intolerance, including Islamophobia, which imposes discrimination and violence, and even threats of genocide, against vulnerable minorities in certain countries,” he added.

Foreign Minister Bilawal said multilateralism must be based on universal and consistent adherence to the fundamental principles of the UN Charter – self-determination of peoples, non-use or threat of force, non-acquisition of territory by the use of force, respect for the sovereignty and territorial integrity of States and non-interference in their internal affairs.

The UN General Assembly – the most universal global forum – must play the central role in reinforcing multilateralism and enhancing equity and justice in international relations, he added.