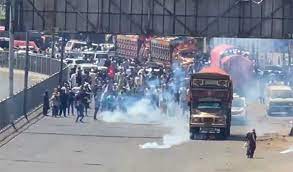 As a result, dozens of protesters were arrested as they clashed with police at Lahore’s Bati Chowk.

A heavy police contingent was deployed at Lahore’s Bati Chowk and other areas of the metropolis to stop PTI marchers.

Amid blockades and crackdown against party workers across the country, the Pakistan Tehreek-e-Insaf’s (PTI) planned long march announced by former prime minister Imran Khan has begun.

The former prime minister and PTI chairman will reach Swabi by helicopter from Peshawar, leading the procession from Ambar Interchange.